As Li Tianbing’s Urban Scene takes up residence in Mayfair’s JD Malat Gallery, Adam Zorgani sits down with the artist to discuss his life and work alongside the spectre of state repression and the darker side of Chinese culture.

How would you describe Urban Scene and what provided the inspiration?

Urban Scene discusses the current social conflict in urban areas, which is often caused by different ideologies and cultures.

The exhibit also tackles issues such as immigration and disparity. My paintings are a reflection of this human dilemma. They have been inspired by images I have seen in the media and my frequent travels back to China. 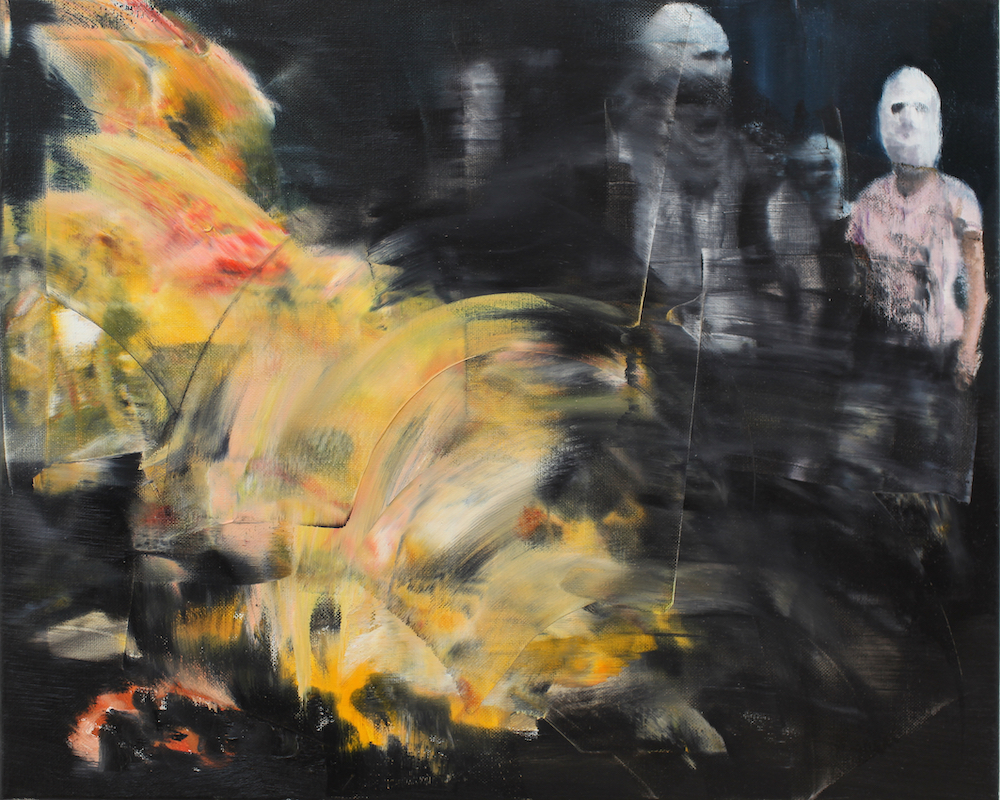 Your work has a sociological/anthro-poltical aspect to it. How early on did your style and focus emerge?

Essentially, it emerged in conjunction with the only child policy in China. When I was younger I spent years talking about a fictional childhood where I imagined brothers which didn’t really exist.

In China, politics affects every individual’s life; Urban Scene is the way I have tried to communicate my own story.

As one falling leaf is indicative of the coming autumn, under the different social changes, an artist is like a small boat in the sea, but always try to express himself in his own way.

Since last year, I have become increasingly interested in the social movements and the conflicts which occur globally. As you know, politics is a firm interest of mine; before I moved to Paris and studied at École Nationale des beaux-arts de Paris in 1996, I spent four years studying international politics in Beijing – the direct interest which my art has in politics. 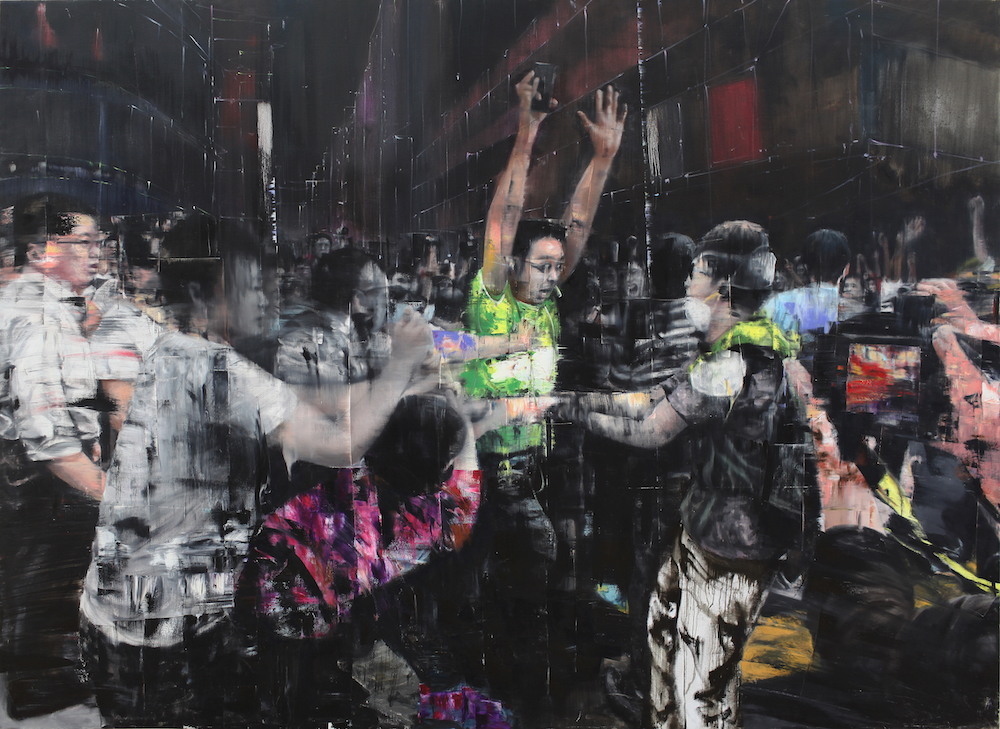 Your art is quite politically charged, what has been the feedback from people back home?

I’ve lived and worked outside of China since 1996. Although I’ve had a few exhibitions in China, most of my shows have taken place in Europe and the US.

I don’t get a lot of feedback from home and I think I will always have a problem showcasing my series there. 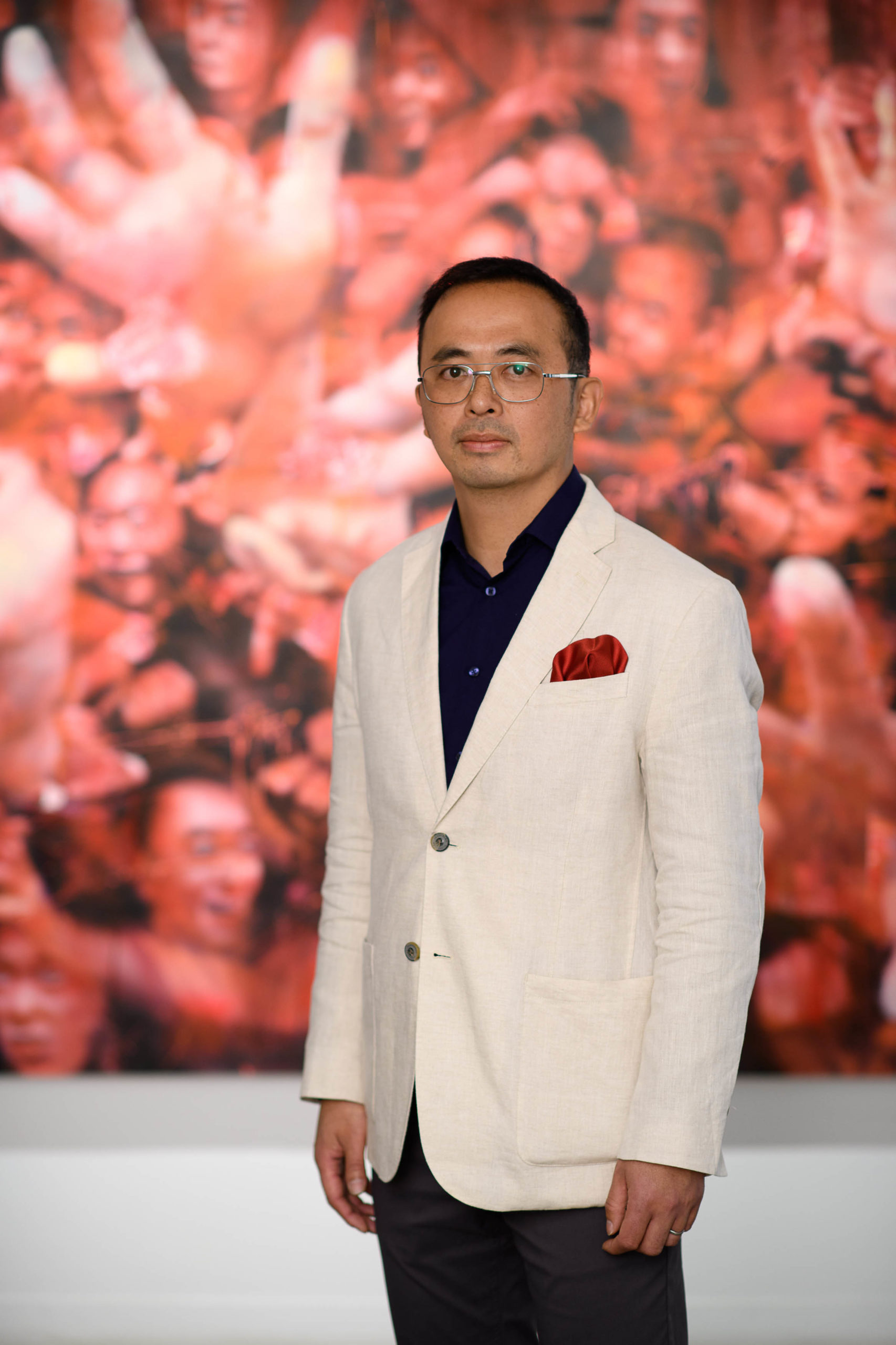 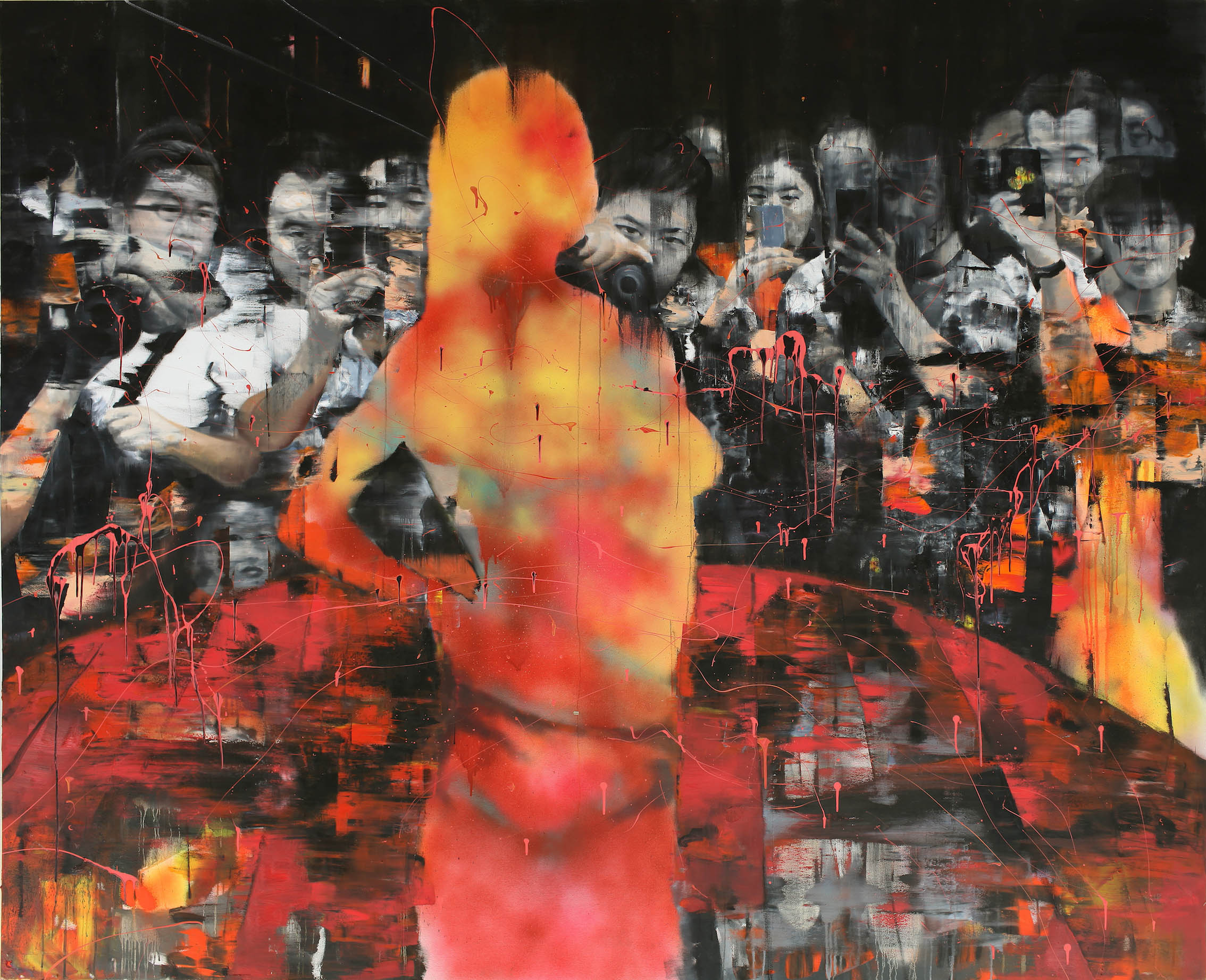 Do you ever worry about personal repercussions or have there been any when you have been home?

Last year, I planned to print my recent catalogue, including Urban Scene, in China as I had done so before.

A private printing factory in the south of China were prepared to print the catalogue; however, a new law that demanded that every sample of prospective published material must go through the government for approval was passed in China.

As a result, the catalogue was rejected and forbidden to be printed, due to the mentions of Mao and my sad childhood which, essentially, was a negative reflection of China.

I feel that China is going in a different direction and is no longer the open China I knew before. 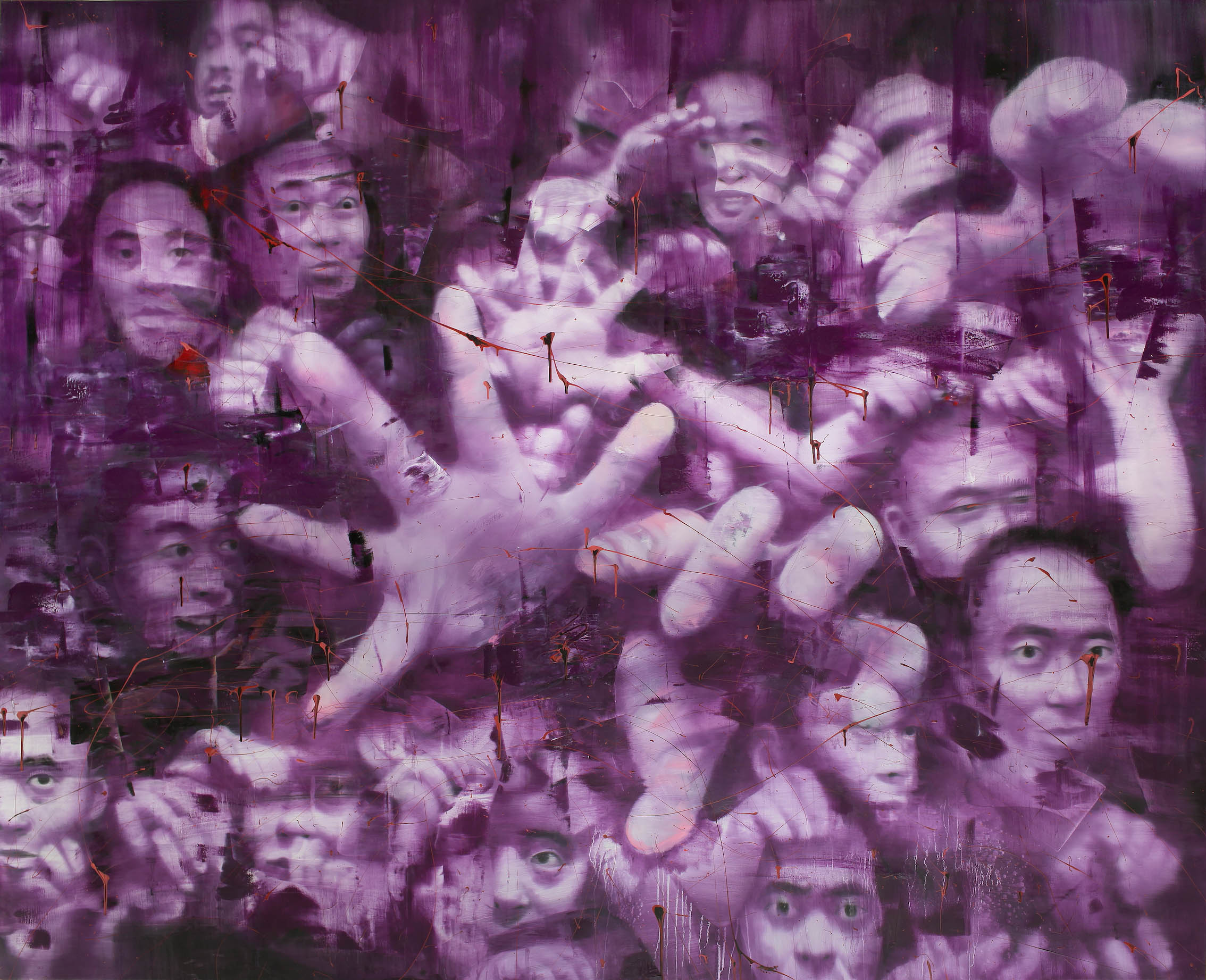 Have you ever contemplated or felt the need to self-censor?

I think that I can make concessions in my life, but a small two-dimensional canvas is the final battle that I will ever give in to. It’s the only place where I can freely express myself. I know that it’s just some colours in different compositions on a canvas but I don’t understand why people are scared of it?

I remember that when I was a child in school back in China, we were taught to only express the positive side of our socialist society through art or writing. 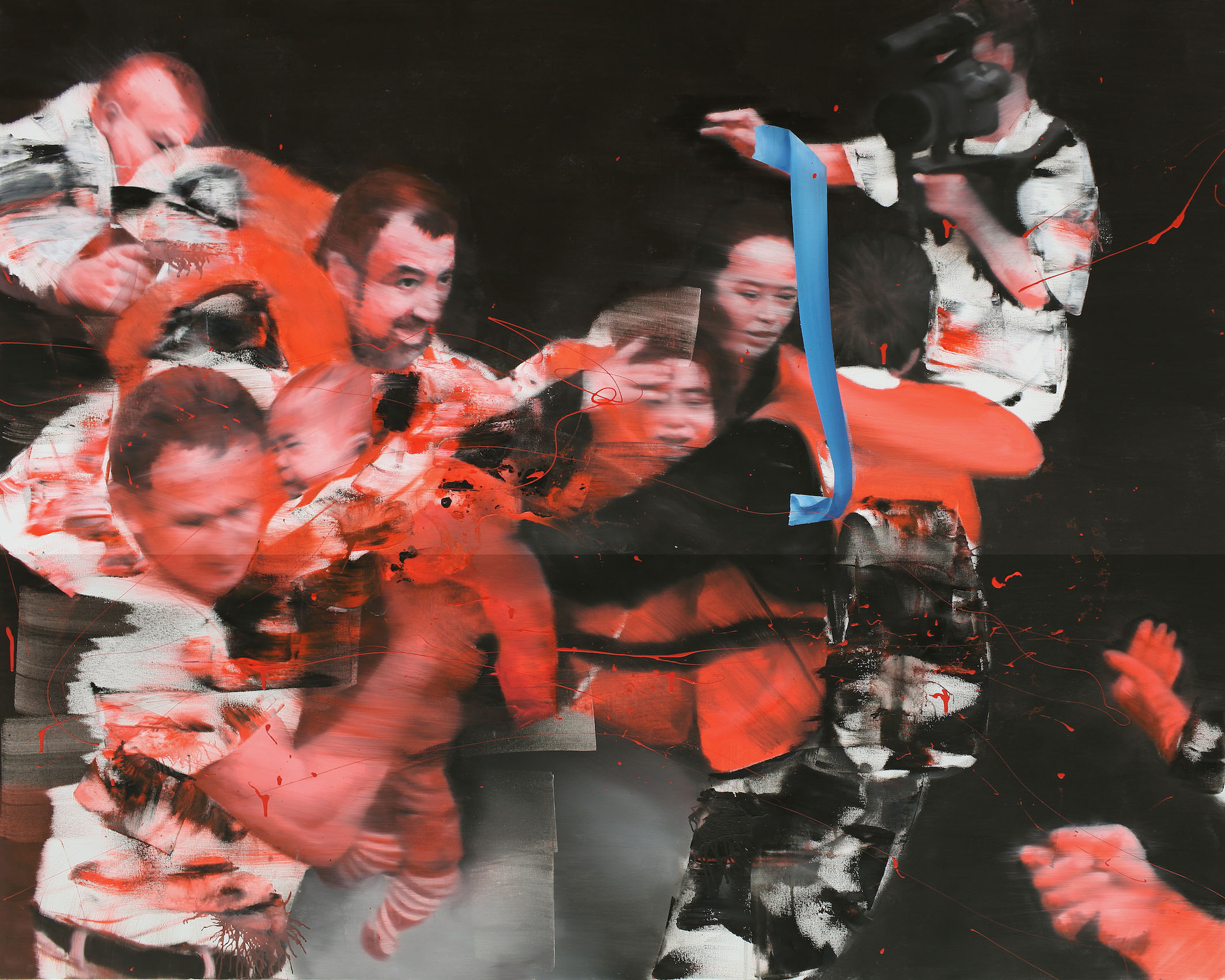 The image of the street fight depicting a woman being beaten by other women is quite visceral. How would you describe Chinese culture? Is it as brutal as that picture would indicate and does it vary across different social contexts/classes?

In modern day China, generally, important and official businessmen usually have several mistresses outside of their legal marriage to showcase that they are successful men. In Chinese we call these women Xiaosan.

Whilst men are praised for having mistresses, these groups of women are subject to high levels of societal prejudice. They are insulted and publicly beaten by the legal wife which is often recorded and distributed on social media.

When this brutal public humiliation occurs, the police do not intervene. It is these media images which have influenced my paintings. 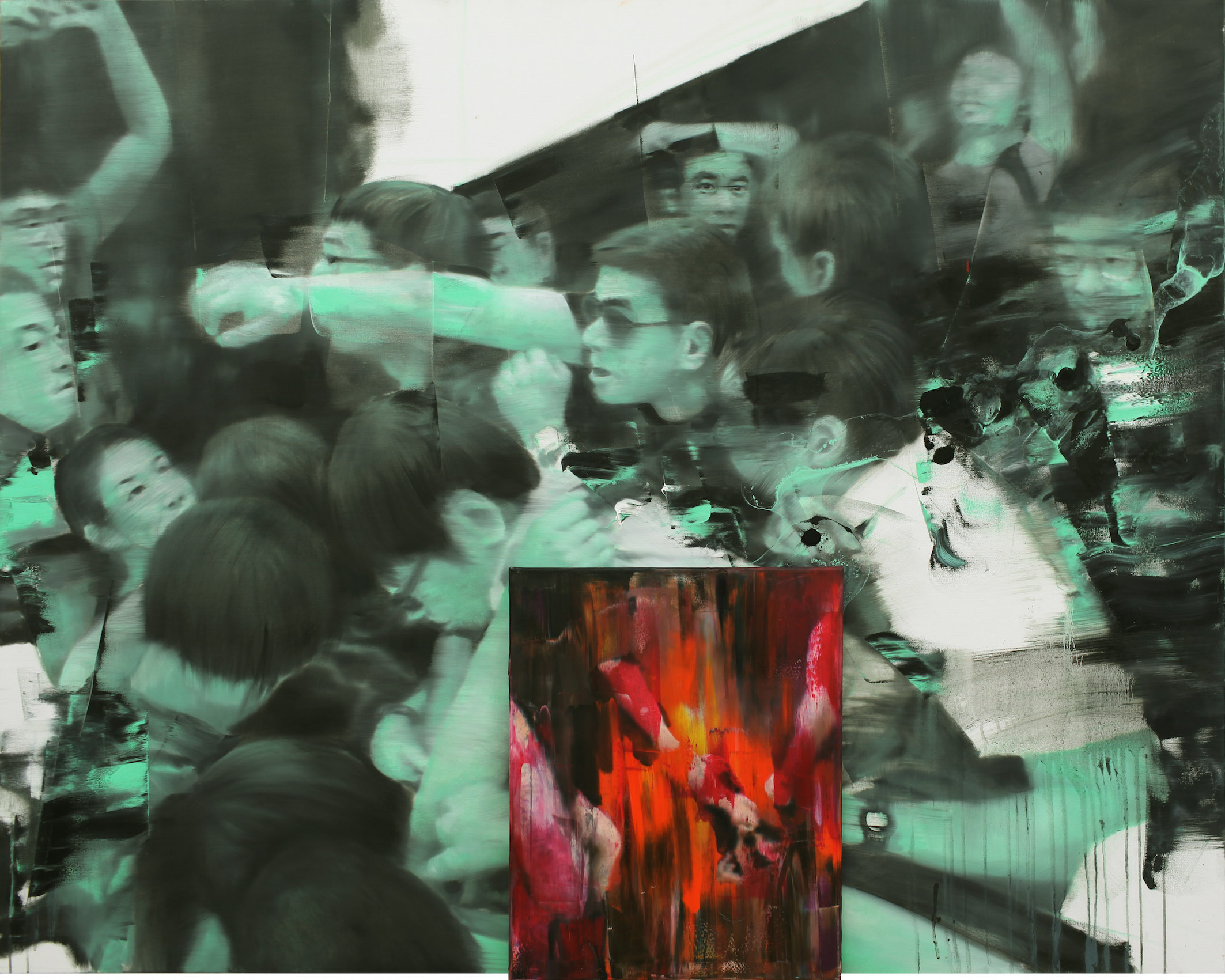 Are you innately drawn to the darker aspect of humanity? If so, where do you think that comes from?

Across the history of art and culture, tragedy is always more profound. For example, the most valued examples of Chinese literature are tragedies ­– A Dream in Red Mansion by Francisco de Goya. The peak in his artistic career was when he was producing intense, black paintings which have always inspired me as an artist.

As mentioned before, the bright side of socialist China was the only expression I was ever allowed to communicate. When I left China I actively decided to break away from this light, fabricated depiction and into the realms of tragedy which encouraged my work to offer more profound depictions of humanity.

What are you working on at the moment?

I’m now working on a series of portraits of political individuals combined with food. Take Trump who, since coming into power, has changed the world we live in; under his leadership, globalisation has been gradually replaced by nationalism.

I hope that my portraits will be able to communicate the impact these individuals have on society.